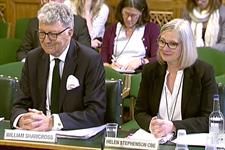 William Shawcross, chair of the Charity Commission, tells a committee of MPs that ‘the only way the charity regulator can be funded is by the charities themselves’

William Shawcross, the outgoing chair of the Charity Commission, has said he hopes that a consultation on charging charities to fund the regulator will be published before Christmas.

Appearing in front of MPs on the Digital, Culture, Media and Sport Select Committee this morning, Shawcross said he hoped the consultation would be published soon to help the commission deal with high levels of demand for its services.

The commission hopes to get an additional £7m a year from charging charities, although it is expected that only the largest and richest charities would pay, with previous estimates suggesting the annual cost to each charity would be between £75 and £1,750.

“In the end, the only way that the charity regulator can be funded is by the charities themselves,” Shawcross said. “Most sectors do fund their own regulators. There’s nothing very unusual about that.”

Shawcross told MPs that demands on the regulator had increased significantly while its budget had been frozen. He said about 8,000 new applications to become charities were submitted each year, and the total number of registered charities had grown by about 20,000 during his tenure.

The commission is also running 187 statutory inquiries into charities, compared with 12 when Shawcross was appointed in 2011/12.

The Charity Commission has had its budget almost halved since 2010 and currently has its funding levels frozen at £20.3m until at least 2020.

This has prompted the Charity Commission to seek a consultation on charging charities to fund more of its work, although this has been delayed repeatedly because of the need to get Treasury approval.

Shawcross, who is stepping down as chair at the end of the year, told MPs that last year’s EU referendum and this year’s general election also caused significant delays to the publication of the consultation.

Also appearing at the committee, Helen Stephenson, chief executive of the Charity Commission, said the regulator had modelled the amount of time needed to deal with certain cases and used this data to predict the amount of funding it needed to be a robust regulator.

Discussing the fundraising scandals uncovered in 2015, Shawcross said the practices uncovered by the press were “outrageous” and the newspapers had “done charities a service in exposing that, as it should not have happened”.

He said that large charities might have “taken their eye off the ball” when it came to fundraising practice before 2015, although he added that the Fundraising Regulator had improved standards in the sector.

Shawcross said the commission had used its new powers, which include disqualifying people from being charity trustees and directing charities to take certain actions, about 70 times since they were granted by parliament last year.