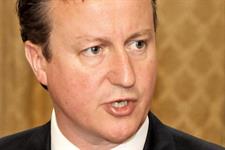 The former Prime Minister was speaking at the launch of the Fore Trust, a new grant-making body for small charities

David Cameron, the former Prime Minister, has admitted that some legitimate criticisms could be made of his big society agenda, which was one of the hallmarks of his first year as Prime Minister.

Speaking at the launch of the Fore Trust, a new grant-making organisation for small charities, in central London last night, Cameron acknowledged that voluntary organisations and social enterprises needed more financial and technical support than had been envisioned under the big society agenda, which was launched after he became Prime Minister in 2010.

But Cameron also defended the idea, saying that rather than there being a binary view of the public sector versus the private sector, more focus was needed on a society that was “vibrant and caring and compassionate – and big, dare I say it, big”.

He jokingly described it as “BS”, but hastily said it was “not BS” and he did not accept the criticism that the agenda, which encouraged more voluntary participation in public and community life and services, was simply a cover to disguise public sector funding cuts.

He said he believed “the fair criticism that was made kind of came in two parts”. The first was that “you can’t expect all of these big society organisations, all of these social entrepreneurs, all of these charities and voluntary bodies to spring into life”.

These organisations were “very often under-capitalised, have problems in replicating their service” and had “difficulties expanding and getting the access to great technology or brilliant management or great systems”, said Cameron.

But he said this was where he believed organisations such as the Fore Trust could come in.

The trust’s official launch came after a four-year pilot project under the umbrella of its parent charity the Bulldog Trust, during which the organisation gave away almost £1m in 51 separate grants.

Speaking at the same event, Mary Rose Gunn, chief executive of the Fore Trust, said the organisation was designed to support smaller charities that might otherwise struggle to secure the necessary funding to get off the ground.

“For small charities there is no one who provides what in the business world you’d call seed funding,” she said.

“It is almost impossible to get the sort of support you need as a small organisation to get you from the kitchen table to the first stages of professionalism. It doesn’t matter how good the operations are or what an amazing impact you’re having, funders generally like things with long track records, otherwise they’re not able to help.”

The trust would offer an open application process that would allow small organisations to identify their own needs and allow those who did not have grant application expertise to have a chance of securing funding, she said.

It will also offer ongoing business support and advice, as well as feedback on unsuccessful applications, Gunn said.

The organisation was now looking to raise and give away £9m over the next three years, and was on course to hit its target of giving away £1.3m in the first year, according to Gunn.

The money would come from corporate investors and supporters, she said, and would also give businesses the chance to invest in small, innovative and unusual charities they would otherwise struggle to find and engage with, she said.

“We going to try and create a better, more effective and fairer funding system that will, we hope, have the knock-on effect of allowing us to make creative change,” she said.