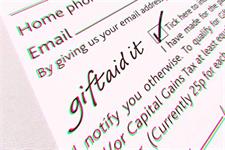 Charities will be able to give donors a higher level of benefit and still claim Gift Aid on certain donations, the government announced in today’s Budget.

Charities cannot claim Gift Aid on a donation that the donor receives any sort of benefit from, such as a thank-you gift, unless the donation is worth significantly more than the value of the benefit.

The government announced today that the different categories of donations would be reduced to two – for donations of up to £100, the 25 per cent value limit would stay in place, but for bigger donations, the benefit could now be worth a total of 5 per cent of the amount of the donation over £100 and 25 per cent of the first £100.

According to the Budget documents, the change will come into force from April 2019.

In a statement, HM Revenue and Customs said: “Under this reform donors will be no worse off in terms of the value of benefits that charities can offer them as the new limits will be, for every eligible donation, at least as generous as the current limit.”

The move follows a review of the donor benefit rules in which voluntary sector organisations called for the rules to be simplified.

Peter Lewis, chief executive of the Institute of Fundraising, said the change was a “positive step”.

“We welcome today’s simplification of the Gift Aid donor benefits rules, which we and others called for,” he said.

The Charity Tax Group had told the review of donor benefit rules that that current rules’ mixture of numbers and percentages was confusing.

John Hemming, chair of CTG, said he was pleased HMRC had taken up the recommendation.

“This will help to avoid the problems of the cliff-edge effect that many charities currently face,and which can lead them to not claim Gift Aid at all,” he said.

“We now look forward to co-ordinating the sector’s efforts to revise the guidance on the donor benefit rules.”