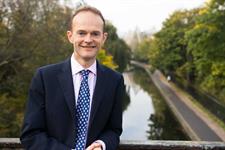 Plus: Save the Children hires former MSP, a new chief executive for the Norfolk Family Mediation Service and Jonathan Sandall joins SSAFA as director of fundraising

Dominic Jermey, the former UK ambassador to Afghanistan, has been appointed director general of the wildlife conservation charity the Zoological Society of London. He joined the charity, which runs London and Whipsnade zoos, today.

Save the Children has appointed Mark Ballard as head of Scotland. The former MSP was director of strategy at Chest Heart and Stroke Scotland .

Gemma Walpole has joined Norfolk Family Mediation Service as chief executive. She was head of fundraising at Redwings Horse Sanctuary.

The armed forces charity SSAFA has appointed Jonathan Sandall as director of fundraising. He previously held the same role at Peabody, which supports people in poverty, isolation or vulnerability in London.

Gemma Juma has joined the grant-maker the Jack Petchey Foundation as operations director. She was director of Link Age Southwark, which works with older people in south London.