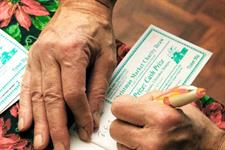 Figures from the Gambling Commission show £255.6m was raised in the year to March 2017

Society lotteries generated more money for good causes in the year to March 2017 than ever before.

Malcolm Fleming, a spokesman for the Lotteries Council, which represents society lotteries, said one of the reasons for the increase was that the percentage of sales income going to good causes had risen from 43 per cent to 43.6 per cent.

The funds generated by the Health Lottery, which consists of 51 local lotteries across Britain operating under one brand, have significantly increased the amounts raised by society lotteries since it was launched in September 2011.

Jo Bucci, chair of the Lotteries Council, said in a statement that 2016/17 had been “a fantastic year of fundraising by the country’s society lotteries”.

But Bucci said a simple change to the law governing society lotteries would help to raise even more for good causes.

She said: “We hope to raise even more this year, but more and more of the lotteries we represent are having their fundraising capped by the sales limits in gambling law.

“These limits are increasingly out of date, and the Lotteries Council urges the government to bring forward plans to raise the limits and help us contribute even more to good causes.”