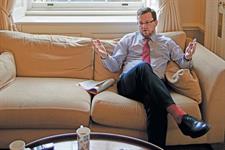 Rob Wilson, the former Minister for Civil Society, has been interviewed for the position of chair of the Charity Commission, Third Sector understands.

Wilson, whose three-year term as charities minister came to an end when he lost his Reading East seat in the general election in June, is understood to be in the running to take over as chair of the regulator from William Shawcross, who has been in post since 2012 and is due to step down towards the end of the year when his term expires.

Wilson did not respond to a request for comment on Monday morning and a spokeswoman for the Department for Digital, Culture, Media and Sport, which will make the appointment, said she could not comment on an ongoing recruitment process.

But Sir Stephen Bubb, chief executive of the think tank Charity Futures, warned that appointing Wilson to the role would threaten the independence of the regulator.

“It would totally undermine the independence of the commission if Wilson were appointed,” he told Third Sector. “It’s got to be seen as independent of political parties and independent of government.”

He said appointing Wilson would “make the work of the commission much harder”.

Bubb said: “How can they tell charities not to be party political if their chair is a very recent Conservative minister?”

Shawcross has attracted some controversy during his time in the role because of issues including his membership of the right-wing think tank the Henry Jackson Society, which he relinquished before taking up the role.

Bubb said: “Given some of the issues the commission has had with the retiring chair, it needs someone completely above the political fray. This is not what is needed.”

He said his objections to Wilson’s candidacy were not due to Wilson’s qualities or qualifications as a person.